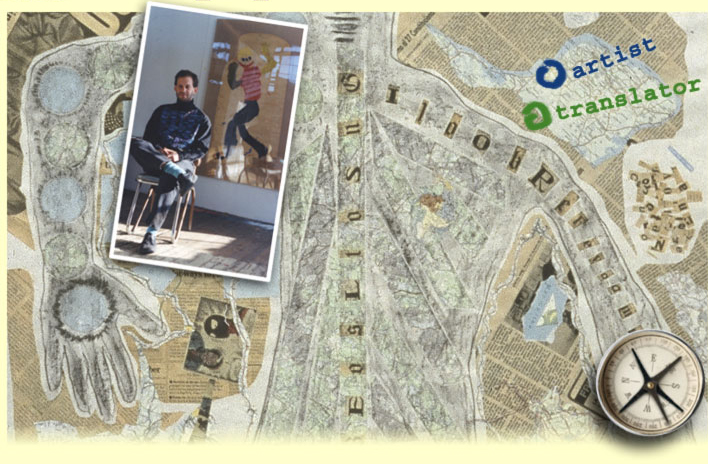 "Comments by Banff Center for the Arts translators- and artists-in-residence on palabra/word, leaf/hoja/page"

“I brought home, altogether, about a dozen leaves from Banff. Most have words, but some are the paper leaves that you sewed real leaves onto. They are all pinned onto my fridge; perhaps it's not the best life end for them, but they were integral to my experience at Banff, so I had to take some with me. For the rest of the residency, I found them, strewn over the grass, hanging in tree branches, even one quite far away from the Aspen.
I think your installation acquired a life of its own.
Sometimes I pull them off the fridge and have them say hello to one another. Now I'm being silly, but what I wanted you to know is that the idea of communication, between all these apparently separate thingstree, leaf, paper leaf, page, human, wind, metaphor, languageit is a lovely, lovely one.
One night Andrés Acosta and I were walking and we stopped under the tree. It was just before all the leaves were cut down. We stood underneath all of them and started trying to find their pairs. It was like being in a crowded room where a hundred lovely conversations were going on at the same time, in two languages. It felt ethereal and otherworldly; peaceful. I had the strange feeling that I was being let in on something that humans don't normally get to participate in.”


“When you left Banff, you left me a note that said at the end, May Banff shine in you and vice-versa Shortly before or after that, I found the word resplandor (radiance) lying on the ground near the tree. At first it startled me because it reminded me of the movie, but then I connected it with your farewell note, which gained new meaning again, the luminous and warm sense that made me smile on that rainy day walking toward Lloyd Hall. In the following days, I found another two words, stepped on but still legible. The first was olvido (oblivion) and the second was memoria (memory). I connected both of them, obviously, with resplandor and felt that this is what life is like, and I thanked you for your installation and David for his poems.”


“I had many pleasant surprises at Banff. One of these was Mark Schafer’s decision to spread poetry into reality, as he put leaves of his own on a poplar on the Banff grounds. As we would walk three or four times a day from the building where we were living to other areas we would see in bewilderment that there were several white paper leaves hanging from the tree. The tree hadn’t gone through a metamorphosis, but rather, a poet had decided to add on new leaves, each one with a word from a poem. One smiles as one walks by.

Coming by the tree the next time, one examines again the leaves to see how the fantasy is growing and how the poetry is gradually taking possession of the green branches of the poplar. In this way, as the days passed, the white leaves would shake, perhaps covered by a poplar leaf, greeting us each time as we walked by.

What more can one ask of poetry? I hope that some day the trees might pour over us the invisible music that they conceal in their branches. We owe that idea to Mark Schafer. I feel that he has brought us closer to a reality that is part of a dream.”

“When I was a girl, it was my fortune to vacation on the shores of Balaton, a lake in Hungary. My parents had a summerhouse there. I was very young and the memories I hold of that place are among the first I can consciously evoke.

Very near to the house, perhaps on the same plot of land, were several poplar trees with dark green and silvery bluish leaves and I loved to watch them shifting in the slightest breeze. The stems of the poplar leaves are long and flexible and allow for leaves to turn as they move, so that one sees them change color from the dark green on one side to the silvery shade on the other. There was a magic in the tremulous movement of those leaves, their movements were free, seemingly independent from the movement of the branches of the trees which, in any case, they shook long before the wind gathered enough strength to move the branches.

This year, 2003, I was fortunate to be invited to a translators’ residency at Banff, in the Rockies, in Canada. There I met Mark Schafer, who, from the first days of our stay, announced that he had a project, which was to make an installation using tree leaves. As the days passed, I saw a poplar, like the ones in my childhood, close to the building where we were living, being modified by Mark.

Bit by bit a miracle took place that drew me close to the golden memories of childhood. Mark took leaves from the tree, sewed them onto scraps of paper of the same shape, and on these he wrote words. Then he tied the leaves to the branches with a thin thread. The leaves that hung from their fairly long threads moved even more freely than when they had hung from their stems. As we passed beneath the tree the minimal amount of air disturbed by our movement was enough to make the leaves with their words dance. Driven by our curiosity, we also moved the leaves with our hands to see how the words written on them were changing, growing ever more numerous.

A dream from my distant childhood became poetry at Banff thanks to this installation by Mark Schafer on the poplar. Once again, I saw the mesmerizing dance of the leaves in the pale sunlight of the last days of summer. It was enormously joyful.”